The Sennheiser GSP 670 is a massive chunk of headset! There is no other way to express this. The GSP 670 is without question the largest headset I have ever had in my fingers. Sennheiser relies on an interesting design.

At first glance, the headset can be recognized as a gaming headset. This is very angular and almost playful. Sennheiser does not use RGB LEDs or the like.

The complete headset is in gray / black. As a result, it almost has a slightly military appearance. I can imagine that many users like this!

This mixture of a rather playful design on the one hand, but the classic coloring makes the GSP 670 stand out from the crowd. We have a unique design in front of us.

When it comes to build quality and solidity, I see light and shadow. On the one hand, Sennheiser relies on a lot of plastic, apart from the suspension of the ear cups. On the other hand, the plastic used is quite thick and stable.

I’m not worried that the headset will break apart or anything like that even if it goes down. 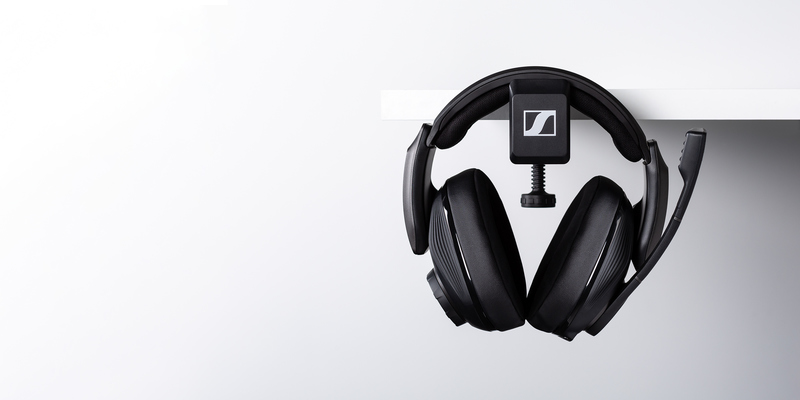 The control of the GSP 670 is interesting. It has no switch, in the narrower sense. Instead, there is a rotary wheel on the right ear cup, which is also used to control the volume.

There is also a universal button, a slider and another rotary wheel on the ear cups. The second rotary wheel allows the volume of voice chats to be controlled independently. So you can turn it “on the fly” louder or quieter, practical.

The slider in turn is for the Bluetooth functionality. In general, the headset uses a small USB receiver, which I would also recommend when using it on a PC.

You can also connect the headset to a smartphone etc. via Bluetooth. Excellent!

The Sennheiser GSP 670 is loaded via microUSB. A suitable charging cable is included. According to Sennheiser, the battery in the headset lasts 20 hours, which is also good in practice.

Comfort is a problem with the GSP 670. In general, Sennheiser did everything right here! The padding of the ear cups is big enough, very thick and also pleasantly soft. The headband is also well to very well padded.

However, the GSP 670 is already a big chunk of headset, which you can feel despite the very good padding. If you have a very small head or generally a low tolerance to heavy headphones, then the GSP 670 is not for you!

If this does not bother you, then the GSP 670 is okay for you.

The most important point without question is the sound. You can also expect great things here, after all the Sennheiser GSP 670 costs € 300 +.

And no the headset doesn’t disappoint! Let’s start at the beginning, i.e. the heights. These are impeccable. The GSP 670 deliver wonderfully clear and clean highs. These also have a good to very good detail display.

However, the headset does not push the treble excessively. So the headset is not super brilliant and, in return, not exhaustingly sharp. So I would classify the heights quite naturally to maybe slightly raised.

The mids are in turn minimally lowered. Footsteps and vocals are clearly audible, but you can tell that the GSP 670 is a bit thinner in the middle.

But this is also due to the spatial sound. Even without separate virtual surround sound, the Sennheiser GSP 670 tries to pull the sound strongly into the width and depth. The headset does this well. The somewhat weaker mids seem to be a side effect.

The basses are pleasantly rich and powerful. In terms of quantity, the GSP 670 tends to be a bit more conservative. We have a fairly neutral to slightly raised bass here.

In general, you can hear the Sennheiser GSP 670 a bit the “optimization” for gaming. As already mentioned, the sound of the headset is very wide and deep. This makes it very easy to locate steps and general noises.

I’m not a CS Go Pro player, but even I noticed the better location. The same applies to games of all Borderlands 3 (which I played a lot with the headset) or Overwatch.

The headset is not too extreme for location. This usually leads to deficits in music playback. Music, both in games like The Witcher 3 or Borderlands 3, or regular music sounds good to very good with the GSP 670!

Sennheiser uses + for the GSP 670 – the same microphone setup as for the GSP 370. So here we have a decent but not outstanding microphone. This is sufficient for Teamspeak, Skype etc. However, a radio headset like the GSP 670 is only suitable to a limited extent for larger live streams or YouTube.

The Sennheiser GSP 670 is an excellent headset, without a doubt! This can be particularly convincing in terms of sound.

The GSP 670 offers a lively and dynamic sound, with a very good width and depth. As a result, the location in games is very strong! However, a pure music playback sounds more than decent!

The GSP 670 is a great all-rounder and the pretty best-sounding wireless gaming headset I’ve ever encountered.

The microphone also offers a decent quality, for a completely wireless gaming headset.

However, the Sennheiser GSP 670 is not perfect, with all its love. The headset is incredibly large and massive. You already have a big chunk on your head. The upholstery, etc. is sufficiently thick, but this cannot fully compensate for the large size and the high weight.

So you have to be able to live well with large headsets so that the GSP 670 is something for you.

Also the price is proud with 320 €! Yes, we currently have the “king” of wireless headsets in front of us, but I would probably still recommend most to the Sennheiser GSP 370 . The sound is only slightly worse, but much cheaper and easier.

However, if you are looking for the best of the best, then the Sennheiser GSP 670 is the answer!

Sony Promises Improved Battery Life in the Next...

Which is the best DXRacer Gaming Chair to...

Turn your Nintendo Switch into an arcade machine...